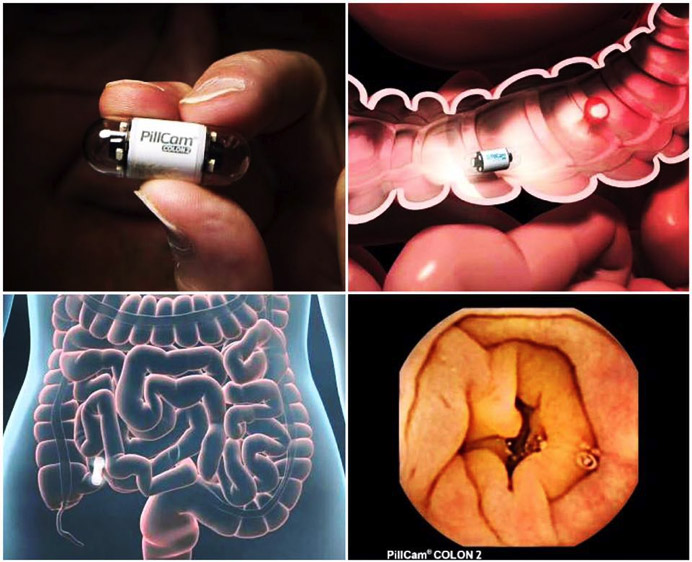 Capsule Endoscopy was introduced commercially at the beginning of the last decade. It is a sophisticated technology developed in Israel, initially aimed at evaluating the small bowel, a long “blind zone”, where upper gastrointestinal endoscopy and colonoscopy can only reach its initial and final portions. In this exam, the patient swallows a capsule slightly larger than a multivitamin tablet. Minutes before that, sensors are installed in the patient’s abdominal wall and a belt with a data recorder is placed on him.

There are different types of capsules, depending on the purpose of the examination and the intestinal segments to be evaluated – small intestine or large intestine (colon). The capsules have one or two small digital cameras in them, as well as four LED lights around each camera. They enable the acquisition of images at an angle that can be almost 360°, in the case of colon capsules. We are able to get between 3 and 35 images per second depending on the peristaltic movements of the intestine and the model of the capsule.

Images are transmitted in real time and by radiofrequency to the sensors installed in the abdomen of the patient, or the belt, and they’re stored in the data recorder, a device designed to receive and store all digital data acquired by the capsule. The patient returns to his usual activities and, eleven hours later, returns to the clinic for the removal of the recorder and sensors. About 50,000 to 120,000 images are generated depending on the capsule used and, after being transferred to a computer with high graphics processing capacity, they’re analyzed by the doctor with the aid of a specific software.

The PillCam Colon 2 is the great news – the new generation of endoscopic colon capsules. Now this technology is available for the first time in Brasilia at Colono, your digestive system clinic. With it, good-quality images can also be obtained from the colon, which is a very useful option for patients who can’t perform a colonoscopy or whose exam could not be completed for technical reasons, since it does not require sedation and does not generate any discomfort.

The equipment used by Colono is the latest version of the PillCam system from Given Technologies, the manufacturer that developed it. The latest capsule made for the investigation of the small intestine (PillCam SB3) is also available.

The idea that made the capsule endoscopy possible emerged in a conversation between an electronic engineer and his neighbour, who was a gastroenterologist, during sabatics in California. The small bowel was an area of difficult viewing, since regular endoscopes and colonoscopes can only reach its first and last few centimeters. As it is a very long segment of the digestive tract and quite mobile within the abdomen, most of its five to eight meters in length were a dark zone.

The solution was to develop a small capsule, slightly larger than a vitamin pill, that could be swallowed. This capsule should have a microcamera (currently, the colon capsule has two), LED lighting, wide-angle lenses, a radiofrequency antenna, a microchip for digital image processing and enough battery time for 8 to 11 hours of uninterrupted operation. And, in addition, all those components should be protected from the various secretions (sometimes acidic and sometimes alkaline) present along the digestive tract.

The result can be understood in the second figure in this text, in its lower left corner. The development of this device was only possible thanks to the advances of nanotechnology. The images obtained are then transmitted and captured by receivers (antennas), which are arranged on the body and connected to a data recorder (on top and left is the data recorder). On the right, you can see a patient with the set installed.
The set produces, transmits and stores as much as 120,000 images that will be digitally processed and interpreted by the examiner. The capsule is disposable and cannot be used again. After all, once activated, the battery runs out after 8 to 11 hours of use. The capsule is eliminated along with bowel movements, and the patient often doesn’t even notice it.

Access the Call Center, there you make your schedule online, find our phones, WhatsApp and email. In addition, you have all information about our units with address, photos and map. Our team awaits your contact!